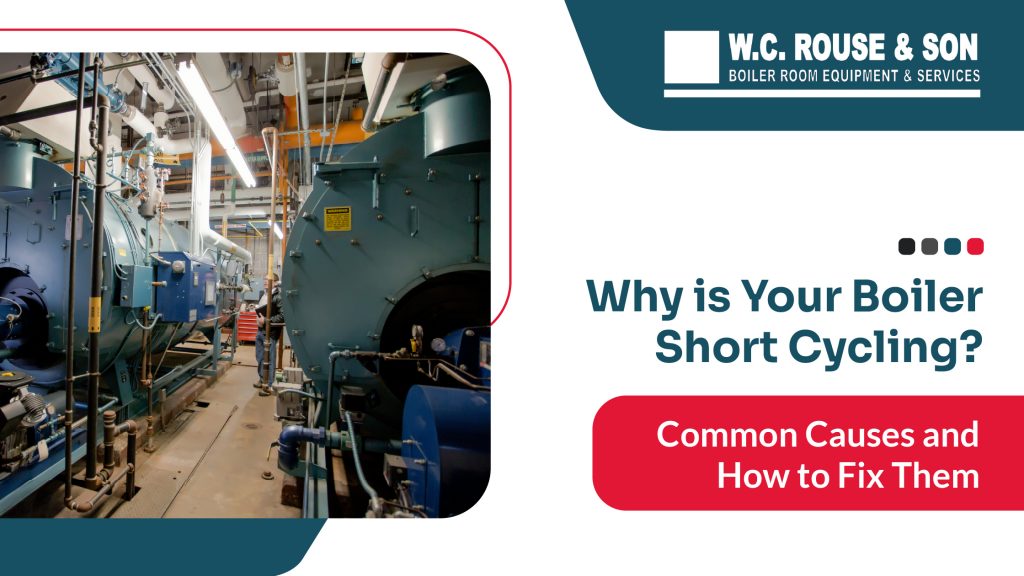 Commercial boilers are commonly used for a variety of facilities. These systems are typically energy-efficient, provide steam or hot water for use in processes or for heating, and tend to outlast other systems. But just as with any system, boilers don’t last forever.

Even with proper maintenance, boilers can experience unexpected issues that can disrupt your facility’s workflow. One common problem that boilers face is called boiler short cycling, which reduces the efficiency and can reduce the lifespan of your boiler system.

Read on to learn what boiler short cycling is, the common causes of a short cycle, and how to fix it if your boiler is experiencing one of these issues.

What is Short Cycling?

Simply put, a boiler cycles on when there is a demand for steam (or for hot water in a hot water boiler). When the demand has been met, the boiler turns off. When the boiler quickly satisfies the demand, this can lead to a pesky issue called boiler short cycling. When a boiler is experiencing a short cycle, it cycles on and off quickly, which leads to cycle losses.

In addition to efficiency losses, a short cycle can lead to a variety of other issues with a boiler’s mechanical components. For instance, rapid heating and cooling with your boiler can lead to fatigue of pressure vessel components. This is known as cyclic stress. Continuously short cycling can lead to the premature failure of burner components. Gas valves, for example, gain additional wear and tear from the boiler’s constant start and stop operation.

Even more, a short cycle can have an impact on water chemistry. This is because hot water and chemical additives need adequate time to disperse throughout the system. If it doesn’t receive the required time before the next heating cycle begins. As a result, your boiler may experience corrosion in its internal components.

How to Know Your Boiler is Short Cycling

A boiler in good working condition should run for about 8-15 minutes before it cycles off again (a good rule of thumb is that cycling over 8-10 cycles per hour is considered excessive). Anything short of that could mean that there is a short cycle issue with your boiler.

A short cycle is one of the most common issues commercial boilers face. If you notice that your boiler is experiencing a short cycle, there could be a variety of reasons why this occurs. Let’s look at five common causes of short cycling and how to fix them.

An oversized boiler is one of the most common causes of short cycles for boilers. An oversized boiler means that your boiler’s output is much greater than what is needed to supply your facility’s needs. Boilers can be oversized from new, possibly planning for future needs that didn’t materialize, or became oversized as processes became more efficient or were no longer needed.  It can also be the case that a boiler is sized properly for peak load, but the facility may have periods of very low demand when the boiler must cycle excessively.

When a boiler system is oversized, it is able to quickly replenish the heat (steam or hot water) that the system is using.  As the boiler satisfies the setpoint, it will cycle off.  Then, it will cycle back on as the temperature/pressure drops.

If you have an oversized boiler, you may need to consider replacing your boiler, or potentially, upgrading the burner to one with a higher turndown (turndown is the ratio of 100% firing rate to its lowest stable firing rate, i.e. 100% to 20% is 5:1 turndown ratio).  You can also look at the current controls being used. Some modern loop controllers have built-in logic to help combat short cycling; depending on the severity of the short cycling, this can be a very cost-effective solution. For systems with a very large disparity between peak and off-peak loads, solutions such as steam accumulators can be evaluated.  Another potential solution, if the off-peak lasts for longer periods of time (think seasons), can be a smaller boiler dedicated to the low loads.

An incorrect boiler pressure or temperature setpoint plays a key role in your boiler’s performance. Your boiler likely has several controls that govern its response to load: The Operator, Limit, and (if so equipped) Modulating.  The setpoints of each of these, relative to the system’s intended operating pressure and each other, are critical.  If they are too close together they can interfere with each other’s operation.  For more advanced controls, the tuning of the PID loop is important, as a poorly tuned control can cause short cycling.

Review your boilers controls’ setpoints; your service company or internal maintenance should have documented the setpoint used during your last setpoint.  If the boiler was not short cycling after the last tuneup, and the is now, and the setpoints are different, it is worth the time to try the last known “good” setpoints.  Consult your boiler’s manual for additional information.  A qualified boiler technician should also be consulted to review the boiler’s operation and response to system load changes.

For hot water boilers, water flow plays an important role in the boiler’s performance.  In short, if you slow down flow through a boiler at a fixed firing rate, the temperature rise across the boiler increases (temperature leaving the boiler minus the temperature entering the boiler).  If this rise takes the boiler past its control’s setpoints, the boiler will cycle off.  Think of it as the system is not capable of moving the energy the boiler is delivering out of the boiler (or boiler loop in a primary-secondary arrangement).  This can be caused by any number of issues; failing pump motors, issues with the ‘wet-end’ of the pump (impeller damage, for example), revisions to the system piping over time, even mistakenly adjusting or opening/closing system valves.

A review of the hydronic system should be performed.  This review would look at piping arrangements versus the original design, valve positions, and pump performance versus as-built.  Any issues identified could then be addressed.

As mentioned earlier, burner turndown can be a consideration.  Turndown defines the lowest firing rate for a burner, for example, minimum fire can be 20% of the maximum firing rate. A poorly tuned burner can limit how far the burner can turn down.

A thorough review of the system, including either clocking the gas meter or installing a fuel flow meter to measure the maximum and minimum firing rate of the boiler is a good start.  This can be compared to your boiler’s IOM (Installation and Operating Manual) and As-Built data sheets to see if the burner is performing to spec.  If found to be out of spec, a qualified boiler technician can retune the boiler for maximum turndown and efficiency.

How to Stop Boiler Short Cycling

Commercial boilers require proper maintenance and care to increase the system’s longevity and optimize performance. Are you having trouble getting your boiler to stop short cycling? Contact the W.C. Rouse repair team to get boiler room experts to find the best solution.

President
After graduating from Florida State University with a B.S. in Mechanical Engineering, Jeff Lawley headed up the engineering department at Schaefer Interstate Railing. A few years later, he took an Engineering Sales position here at W.C. Rouse & Son, and over the next 8 years, he worked his way up to the position of President of the company.