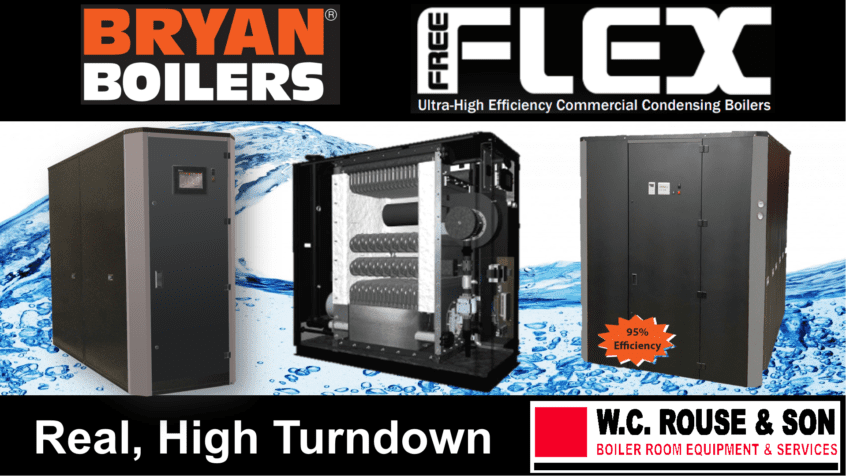 There are many articles written about and we’ve previously covered, the limitations of high turndown, condensing boilers (just Google “turndown & condensing boilers”).  If you haven’t read any of those articles, here is a brief summary:

In the last article written on this topic, we also mentioned upcoming control strategies that appear to be ready change the above assessment.  The new control strategies are now available, the following is a quick update on these controls.  The new control scheme is powered by Siemens parallel positioning controls – the same as used on larger, traditional boilers – now fitted to condensing boilers.  This allows for more precise control of the air-fuel ratio and at least as importantly, according to one boiler designer, they can maintain a higher fan speed and improve the ‘mix energy’ for the air-fuel

The image above shows the servo motors.  You can see the air servo (top) and fuel servo (bottom) circled in red.  These are positioned independently of each other, during commissioning, when a technician “sets the curve”. This is the same style of control system commonly found on larger, traditional boiler designs.  As control costs have come down, this is sort of control scheme is now a practical option on the smaller (relative to traditional boilers), condensing boilers. Per the manufacturer (Bryan Steam) this control scheme allows for precise, high turndown control, improved reliability and increased efficiency (controlling excess O2 – consistent flue gas dew point throughout the range).  Their final, published turndown ratio will be 20:1 – though they were able to comfortably achieve more in their lab – this ended up being a safe, reliable, repeatable set point.

This control is currently available on the larger sizes (3.5-6MMBH) of their FreeFlex boilers and will be an option on the smaller units (1-3MMBH), in the coming months. Without the parallel positioning control, the standard turndown remains 5:1.

All of the FreeFlex boilers still enjoy the benefits previously highlighted on our site. Head to https://bryanboilers.com/free-flex/ to learn more about this rugged, efficient boiler.

We’re excited to continue our great relationship with Bryan Steam and represent this awesome boiler! If you have questions regarding anything in your boiler room, please call us at 336-299-3035, email at sales@wcrouse.com.

President
After graduating from Florida State University with a B.S. in Mechanical Engineering, Jeff Lawley headed up the engineering department at Schaefer Interstate Railing. A few years later, he took an Engineering Sales position here at W.C. Rouse & Son, and over the next 8 years, he worked his way up to the position of President of the company.